Scoring should give consideration to how much you enjoy the beer, as well as the beer’s adherence to the declared style and the presence/ absence of any technical flaws. After all, this is a competition to showcase our brewing skill and ability, and adherence to prescribed parameters is a great way to showcase that. But what’s the point in brewing a technically perfect true to style beer if it’s not also enjoyable to drink?

Feel free to refer to the BJCP Scoresheet for guidance and descriptors.

And here’s a link to the BJCP style guidelines for anyone who wants to brush up on a given style.

For entries without any declared style, you can assume the brewer would like their beer to be judged 100% hedonistically. 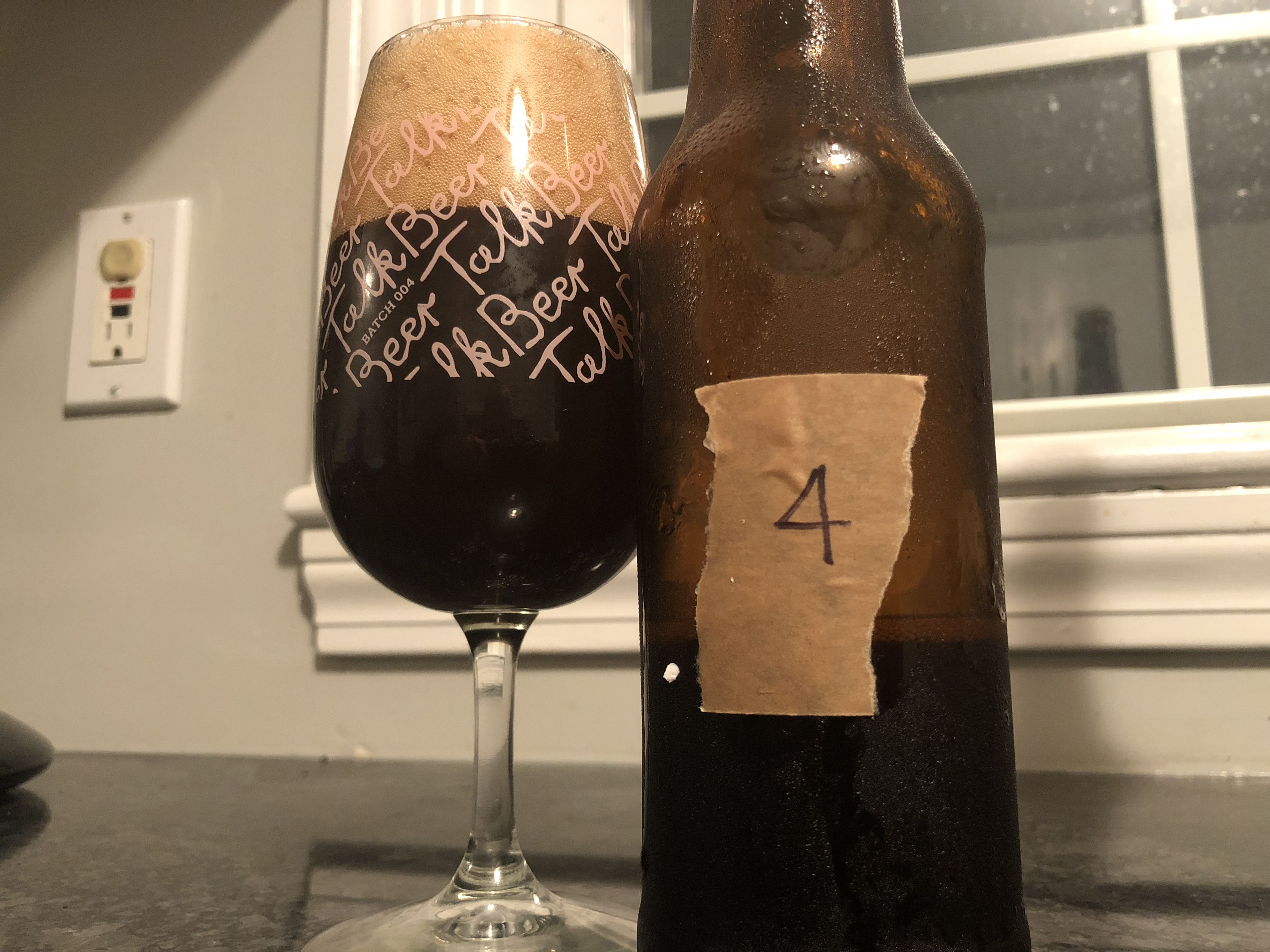 Aroma - sweet, minerally, slightly metallic, a bit of booze, aroma of a porter potentially a stout 8/12


Flavor - first flavor that hits is the booze, slightly astringent roast, sweet malt aftertaste, molasses/brown sugar. Can’t say I get much hops from this. 10/20


Mouthfeel - medium to full body, not sure if the alcohol helps with this, low carb 3/5


Overall Impression - the almost cloyingly sweet nature of this didn’t turn me on at all. No style indicated on the bottle but I can only assume something between a sweet stout, some form of stout, or even a porter. 6/10

Aroma: Brown sugar, star anise, and coca powder all make an appearance, in order of intensity. A lot of the aromas I'd normally expect in a porter or stout, though normally the more roast like qualities are a bit more prominent. There's also a slight metallic quality to it, which I'm attributing to the high amount of carbonation present. (8/12)

Flavor: More brown sugar, as well as some caramel (which I'm not sure if it's coming from a specialty grain or diacetyl). Black licorice is still there, though it doesn't jump out as much as in the nose. There's noticeable carbonic bite from the all the carbonation early on, but as the beer sits for a while that fades and creates room for milk chocolate. A very mild alcohol presence that (13/20)

Mouthfeel: The body has a little bit of substance/chewiness to it. The carbonation is just way over the top though for a dark and presumably malty style. (2/5)

Overall:There are definitely some nice malty flavors to be found here, though the overall impression is a little too unbalanced/sweet. That said, the carbonation is primarily killed this beer for me. It was a bit of a gusher when I first opened the bottle. There was noticeable improvement after the beer had been poured out for a little while. (6/10) 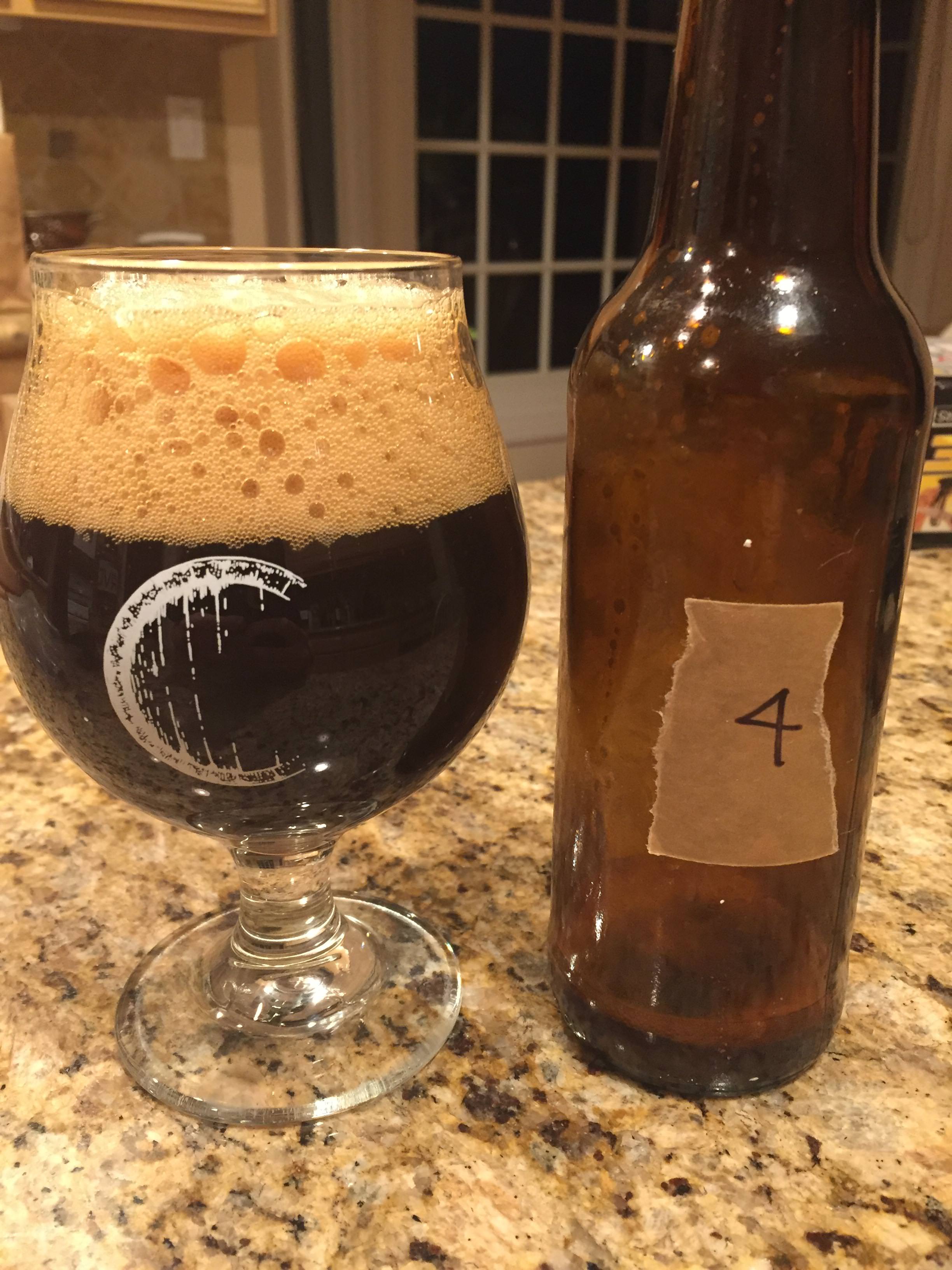 Aroma: Big waft of medicinal and metallic aromas that I typically associate with chlorophenols initially and on subsequent swirls of the glass. Underlying is boozy alcohol, maple, and chocolate syrup.

Appearance: High carb resulted in a fizzy and loose two finger tan head that recedes to a ring around the glass after about a minute. Ruddy dark brown body.

Flavor: Sweet maple syrup, caramel, followed by more metallic chlorophenols and a lingering boozy finish. High carbonic bitterness and bite. Was looking for a bit more roast, and it began to show itself as it warned towards the tail end of the glass.

Mouthfeel: Thick and mouth coating, but the high carb is cutting through that. Things improved a bit

Overall: I’ve always been sensitive to the perception of chlorophenols, as it was an issue in my early home brews, but have been tricked by excessive amounts of water salts in the past as well. Would be interested to see how you treated your water on this one as that and the high carb we’re this beers two largest issues for me. There were some familiar and pleasant stout/imperial porter malt derived notes in there, but hard for me to get past the flaws listed above!

Flavor 5/20
Phenolics dominate the overall flavor profile making it pretty difficult to palette. Has a very sweet, wort-like taste that tells me that something went awry during the brewday or in fermentation.

overall 2/10
Gotta be honest, I didn't get through much of this one. Seemed like something went wrong in fermentation, maybe it got too hot and killed off the yeast or a similar issue. Hard to say from the bottle, I typically only know flaws that I have personally suffered so I can't help much here. The bottle was a gusher but it wasn't terribly cold either. Unsure of style, thought it might have been a porter.

Location
America's penis about halfway down the shaft

Aroma - Quite a bit of sweetness, brown sugar and some dark fruit. 7/12


Mouthfeel - Despite being very over carbed there was still a full bodied beer present. Carbonic bite present but decreased with time 2/5


Overall Impression - Very sweet but to the point that it was undrinkable. The carbonic acid bite made this tough for me to really enjoy. 5/10

Long overdue review on this monster.

Based on earlier reviews I was expecting to take a few sniffs and a few sips, jot down a few notes and pour the rest down the drain but that’s not what happened. To my surprise I drank it all. And enjoyed it. Probably finished it too fast in fact. Don’t make me put a number on all the things though. This is not some low-context linear BJCP sanctioned review. Did I like it? Yes! It’s all like 4 caps, except smell. Smell is probably not 4 caps. I couldn’t get past that chlorophenol. Other than that though there was plenty of chocolate and some brown sugar and definitely cinnamon or peppers or something. Thicc but not too too sweet. Kind of all in balance. It’s like an imperial brown adjunct something.

I deliberately saved this beer for last. It was pretty clear from the early reviews and just the profile of the beer it was rushed and needed more conditioning time. Whether by deliberate design, lazy happenstance or a little bit of both I ended up waiting nearly eight months from shipping to drink it. Maybe that helped?